Styrelseledamot i Card of Joy, MAG interactive samt Like a Boss Games. 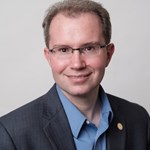 He also was named a Young Global Leader by the World Economic Forum for 2016-2021 and Business Insider identified him as one of the top "24 Americans Who Are Changing the World".

He has served in different positive #ChangeAgent capacities, including leading the technology response for the U.S. Centers for Disease Control and Prevention's Bioterrorism Preparedness and Response Program to 9/11, anthrax in 2001, SARS and monkeypox in 2003, and other public health outbreaks. He also was a senior strategic advisor in Afghanistan in 2009, helping to think differently" on military and humanitarian efforts in the region; executive director for bipartisan a National Commission reviewing major Research and Development programs; and chief information officer for the FCC from 2013-2017. He led a team of positiv #ChangeAgents to receive the Global CIO 100 award twice in both 2015 and 2017. Since 2017, he has served on the American Academy for the Advancement of Science's Selection Committee for the AAAS Lemelson Invention Ambassadors program and was also named a Marshall Memorial Fellow to Europe.

He serves on the Board of Directors and Advisory Boards for multiple organizations focused on adaptive strategies regarding global turbulence, social impacts of technologies, and distributed decision-making in challenging environments.